Back in July, at the High-level Political Forum on Sustainable Development (HLPF) in New York, UN Secretary-General António Guterres had already pulled no punches in his analysis: the world is in a desperate situation, and the SDGs are no exception, he lamented. But in his video message he gave the public hope: “We can still turn the tide if we all stand together – governments, civil society and the private sector.” But this mission needs, more than ever, the support of countries like Germany.

Heidemarie Wieczorek-Zeul: We must prevent new blocs from forming

Already last year Guterres himself launched various reforms towards inclusive and networked multilateralism, summarised in “Our Common Agenda”, including proposing a UN Summit of the Future. Heidemarie Wieczorek-Zeul, former German Minister for Development and member of the RNE, acknowledged Guterres’s proposal to establish a regular joint summit of the G20 and ECOSOC (UN Economic and Social Council) states together with international financial institutions. This could act as a kind of global sustainability council, she explained, which would serve as a compass for the further development of the SDGs.

“The multilateral system is not suited to resolving the combined crises we are facing”, said Wieczorek-Zeul. She went on to accuse the industrialised countries, in particular the G7 states and the EU, of hypocrisy for failing to provide sufficient funding to combat climate change and the pandemic. “We have to stand by our commitments”, insisted Wieczorek-Zeul. The German budget plan for 2023 would not be enough to expedite progress on the SDGs. Wieczorek-Zeul was applauded for her call to defend democracy, rule-based multilateralism and international law against their critics – but at the same time do everything we can to avoid new blocs forming in the international community. “I know this happens, but we must prevent it”, she said.

Nobel Peace Prize winner Ellen Johnson Sirleaf, President of Liberia until 2018, also recounted in a video message where the multilateral system has done too little for people and the planet in recent times: on climate action, global healthcare, food security, handling forced migration and upholding human rights and democracy.

Sirleaf is also Co-Chair of the High-Level Advisory Board on Effective Multilateralism, which was founded by Guterres to put the ideas of the Common Agenda into practice. “Be bold, think bigger, we cannot solve the challenges of our time half-heartedly”, she urged, calling on Europe and Africa to work together on transformative change – and create multilateral institutions in which the Global South plays a genuine role in decision-making processes.

Svenja Schulze, current German Minister for Development, gave four answers to the ongoing crises. Firstly: 828 million people around the world are starving – that’s considerably more than before the pandemic. Against this backdrop, the G7 in partnership with the World Bank set up the Global Alliance for Food Security with the aim of establishing not only acute aid but also structural change, such as more resilient agrarian systems. Secondly, the impacts of the pandemic are still very much being felt, especially in the Global South. Efforts are therefore being concentrated on ensuring that vaccines are available – and also produced – worldwide. Healthcare systems, too, must become more resilient.

Thirdly, Schulze continued, people all over the world must play a part in the war on climate change. Germany, therefore, is working to ensure a just transition. Fourthly: We need gender equity in order to achieve these goals. “In most countries around the world women do not have the same rights as men”, explained Schulze. Yet research shows that societies where woman have equal rights are also more sustainable. As such, Germany fosters a feminist development and foreign policy.

Former head of Greenpeace and since March 2022 Special Envoy for International Climate Action in the German Foreign Ministry, Jennifer Morgan, emphasised: “If the SDGs are not addressed, the climate crisis cannot be resolved either”, the necessary foundation for this being a global, ecological, social and market-based economic system. “Germany has a big responsibility”, she explained: “We are living at a disruptive moment.” At the next UN Climate Change Conference in Egypt in November, Morgan will lead the negotiations for compensation for future meteorological disasters as a facilitator together with the Chilean ministry for the environment. The debate around “loss and damage”, as the experts call it, has already caused major conflict at previous climate conferences in response to the industrialised countries refusing the key demands of the poorer nations. And it is not getting any easier since a member of the UN Security Council, Russia, has brutally violated international law. What the future holds for the international community, which thus far has followed the path of multilateralism, is anyone’s guess. But Morgan remained positive, pointing out there are “new opportunities to work together with allies”.

The great potential that partnerships can hold was highlighted by Emmanuel Ametepey, Director of the African Youth SDGs Summit – a forum set up in 2017 that now reaches more than 100,000 young people in Africa. “Africa is the continent of youth, a continent full of brilliant ideas, with enormous creativity and innovation. The question is: How can we support that?”, he asked. June 2023 will see the fifth African Youth SDGs Summit in the Zambian capital Lusaka. “I would like to issue an invitation to the young people of Europe: Come to us. Let us develop ideas and solutions together as to how we can put the SDGs into action”, said Ametepey. Last year as part of the Common Agenda, Guterres founded the UN Youth Office, in which Ametepey sees a great opportunity to coordinate, finance and boost the engagement of young people around the world. He also encouraged young people to get much more involved in national and international SDG policy processes.

The conference was brought to a close by Imme Scholz, Deputy Chairwoman of the RNE, who looked ahead to the next Global Sustainable Development Report 2023, which she will co-edit: “It is important to us that there is a better understanding of what transformation means. If something new is to emerge, for example a renewable energy system, then not only will the new system proliferate, but there will also be things we have to leave behind. That is a painful process, which goes hand in hand with much resistance – we need to work proactively with that situation. Moreover, the transition is taking place at different speeds, which makes it all the more important that the federal government and the new German Sustainable Development Strategy will act across policy fields and within the six main areas of transformation.” 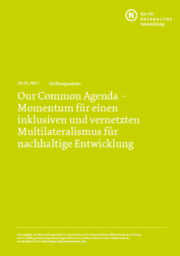 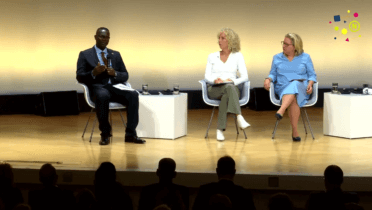