It is a day of taking stock. The German Council for Sustainable Development (RNE) invited interested parties to come to the Tempodrom in Berlin for its 18th annual conference which was attended by an audience of some 1,400 guests from Germany and abroad. The key question being: where is German sustainable development policy at?

In her opening address, Marlehn Thieme, Chairwoman of the RNE, forgoes any suspense, saying: “Without wanting to fall into false exclamations of catastrophe, the answer is yes, we have great cause for concern.” If politics were to give up on its goal of reducing greenhouse gas emissions by 2020, for instance, she warned, it would endanger not only the climate but also democracy. It would signal that the political arena no longer believes in itself, which would in turn provide fuel for populist and right-wing movements. To put it another way: the world itself is at stake.

Thieme bases her statements on the results presented by an 11-person international expert commission that reviewed the German Sustainable Development Strategy in great detail over a period of around eight months. Facilitated by the RNE, the high-level commission met with stakeholders from throughout the German sustainable development policy arena, engaged in talks with some 100 representatives of politics, the business sector, civil society and academia and subsequently deliberated on conclusions and recommendations. Their work is summarised in a report that lays out where things are progressing well and where there is still work to be done.

On the whole, as an affluent high-tech country with engaged citizens and experience in stakeholder dialogue, Germany has “the capacities it needs” to achieve the transformation, stated Helen Clark as she introduced the report at the Tempodrom in Berlin and presented it to Federal Chancellor Angela Merkel. Clark, former Prime Minister of New Zealand and later Administrator of the Development Programme of the United Nations (UNDP), chaired the peer review. However, as Clark continued, “the results in practice are not what they should be.”

Biodiversity is disappearing, land consumption is decreasing too slowly and the carbon footprint in transportation, for instance, is stagnating. Moreover, health concerns related to obesity are growing and the fact that social disparity is widening further are criticisms also mentioned by Clark and the other Peers.

Seven of the Peers were also in attendance at the annual conference and were available to answer questions. They would all like to see a swifter tempo set and a higher level of ambition regarding the transformation towards a sustainable society – and formulated 11 recommendations:

But isn’t progress contradicted by one thing in particular, namely growth? – came the question from the audience. Germany definitely needs to discuss the issue of prioritising “value over volume”, responded Peer Jan Gustav Strandenaes. The Norwegian policy consultant previously worked with staff at the United Nations, among other things.

Imme Scholz, Deputy Director of the German Development Institute (DIE), took the feedback from the experts on board as “encouragement”. And RNE Chairwoman Thieme summed up that it was “time for decisions to be taken that might not please everyone,” directing her appeal to the Chancellor.

As in previous years, Federal Chancellor Angela Merkel was in attendance for the RNE annual conference. In her speech, Merkel emphasised, “Sustainability has made great inroads in politics, the business sector and civil society. More and more people are facing up to the full breadth of the issue of how they can work sustainably and be sustainable consumers.” Nevertheless, the Chancellor announced that the Federal Government would be continuing to work to elevate the German Sustainable Development Strategy. The idea of sustainability must become even more the guiding principle for governmental action, she continued. In the view of the Peers, this is a crucial point. As the report states: “If Germany can’t pull out all the stops, who could?” 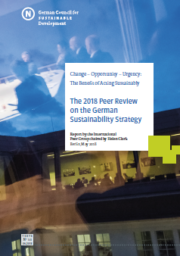 The 2018 Peer Review on the German Sustainability Strategy

The international peer review group on the German Sustainability Strategy has published its report. (barrier-free document)

Speech at the Annual Conference of the German Council for Sustainable Development, 4 June 2018, Berlin