The end result was a joint call to action that doubled down on some of the proposals put forward by UN Secretary-General António Guterres in Our Common Agenda. These include systematically involving young people in political decision-making; improving protection of global commons such as the oceans, the atmosphere and the rainforests through a dedicated global fund; redirecting fossil fuel subsidies towards clean technologies; and making food systems more resilient.

These are just some of the demands set out in the since published joint call to action which was drawn up by the councils and similar advisory bodies on sustainable development now established in many countries across the world – not least the German Council for Sustainable Development (RNE) – at their meeting in the South African capital Cape Town back in September. With the Global Forum, the bodies have formed a network to learn from each other and routinely share ideas on how to inspire and boost progress towards the 17 SDGs adopted by the international community in the 2030 Agenda for Sustainable Development.

Because the clock is ticking and the world is still a long way from achieving its goals. War, pandemic, hunger, inflation, energy crisis – only recently Guterres issued a stark warning: “Our world is in peril”. But it wasn’t too late to salvage the SDGs, he insisted. So what are our colleagues in other countries doing? What is working well? How can we recruit people to the cause?

Getting trade unions on board

Take Mexico as an example. Felix Meyerhoff, responsible for international processes and the Global Forum at the RNE, believes that “In Mexico the local sustainability council has built up impressive ties with the trade unions”. It is crucial to have the workers and their representatives on side if the economy is to become climate-neutral and more resource-efficient. Although to begin with, Meyerhoff continues, the trade unionists were somewhat reticent. But the Mexican council kept plugging away, seeking talks, listening, not going straight in with demands, and insisting on adherence to the goals. That helped to grow trust and now the two sides are cooperating more and more. It’s the ‘don’t go in all guns blazing’ approach that helped cultivate the connection.

Collaborations and inclusive partnerships are key, and in many countries religious communities also play a major role, explains Meyerhoff. One of the aims is to systematically engage first and foremost those in the sustainable development debates and processes who are particularly impacted by the necessary transformations – such as the younger generations. In Kenya, for example, they have a regular civil society caucus that brings together most of the relevant actors in the country to review progress, recognise champions and foster mutual learning.

Originating at the UN SDG Summit in 2019, the Global Forum network gathers and explores ideas for strengthening societal discourse and finding consensus on sustainable development. Members also propose how this can be organised and what structures the national governments need to support for this to happen. As such, the final document also states, for example, that governments should have a sustainable development strategy or similar, create marketplaces for ideas and especially also promote local networks.

These and many other ideas and projects were discussed at the networking event of the Global Forum from 5 to 7 September 2022. The gathering in Cape Town was attended by more than 30 members and affiliated organisations. Since the network was founded three years ago, the Forum’s administrative office has been run by the RNE, but this has now been handed over to its South African partner and a further organisation.

The proposals of the Global Forum have come at a crucial time: after a four-year interval, September 2023 will see the next UN SDG Summit, where the roadmap will be updated. This will be followed a year later by the Summit of the Future, as proposed by UN chief Guterres in ‘Our Common Agenda’. 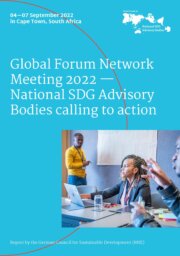 Photo gallery: Networking event of the Global Forum from 5 to 7 September 2022 in Cape Town.