Berlin, 08. December 2022 – The German Council for Sustainable Development (RNE) and the German League for Nature and Environment (DNR) have released a joint paper to mark the opening of the World Conservation Congress (CBD COP 15) in Montréal, Canada. In their paper, the two organisations call for an improvement imperative to be written into federal nature conservation law which would ensure a greater legal commitment to improving the ecological state of nature and landscape. In their view, the current law, which stipulates a “no degeneration” rule in the case of any disturbance to the natural environment, fails to even preserve, let alone improve, the state of biological diversity in the face of rapidly worsening species extinction. Conversely, the local compensation measures currently required by law may in fact hinder the urgently needed fast-paced expansion of renewable energy. In particular, legally enshrining an improvement imperative, which would in turn see large-scale, supra-regional compensation measures replace small-scale local measures, could resolve the nationwide competition for land in Germany between nature conservation and the expansion of renewable energy, while also easing the biodiversity and species crisis in equal measure.

RNE Chairman Werner Schnappauf: “We are under a great deal of pressure to transform our energy systems quickly and comprehensively – for environmental reasons but also to secure an independent energy supply. At the same time, however, we need to improve species conservation. Current small-scale compensation measures at local level serve to protect neither climate nor wildlife. Instead, we need to drive broad-scale improvements to the natural environment while at the same time accelerating the expansion of renewable energy in order to address the two-pronged crisis that is biodiversity loss and climate change.”

DNR President Kai Niebert: “We find ourselves in the midst of the sixth mass extinction of species in the history of the earth, but for the first time, we humans are at fault. The climate crisis is progressing apace and is only exacerbating the situation. Many of our ecosystems are on the verge of reaching their tipping point – globally, but also in Germany, such as the nutrient-poor moors or the incredibly diverse grasslands. The natural environment is already under so much strain that, moving forward, compensating for loss alone will no longer hit the mark. Instead, we need to qualitatively improve the standard of nature elsewhere. To get there, we need to fundamentally rethink how we do things in order to improve living conditions in our cultivated landscapes on a major scale and dial back the clock, turning our protected areas back into undisturbed nature reserves.”

The paper outlines six key issues to propose targeted solutions for bolstering German biodiversity. In addition, it aims to resolve the competitive tension between nature conservation and the energy transition, food production, resource extraction and human health, a subject which has rather bogged down the debate. Further to calls for an improvement imperative, the paper proposes, for example, adopting a tradable certificates scheme to reduce the risk and application rate of plant protection products or equally a reward system for climate- and biodiversity-friendly land use that would incentivise sustainable agricultural production.

The paper further identifies a need for companies to play a greater role in biodiversity regeneration. Biodiversity erosion and the climate crisis pose an enormous risk to business. The decline of pollinators, for instance, represents a major threat to agriculture, while climate change is damaging forests, putting the timber industry at direct risk. Accordingly, corporate cultures and strategies need to adapt quickly and comprehensively, while company strategy and planning must incorporate risks arising from climate change and biodiversity loss into company operations. Similarly to how CO2 has become the measurement and impact variable in the sphere of climate change mitigation, an analogous internationally recognised, standardised and easy-to-measure indicator for biodiversity could help cement biodiversity as an authoritative and comprehensive factor in accounting and reporting standards.

Germany also has a responsibility for biodiversity conservation at global level, not least against the backdrop of its economic and nutritional practices. The German government must therefore also act to see a solid, binding international agreement adopted at the World Conservation Congress in Montréal that is capable of both halting and reversing biodiversity erosion.

The joint paper “Committing to Better Biodiversity. Strengthening the Position of Biodiversity in the Sustainable Transition” is a collaborative project between the German Council for Sustainable Development (RNE), an advisory body that counsels the German government on sustainability issues, and the German League for Nature and Environment (DNR), the umbrella organisation for conservation and environmental protection organisations in Germany. 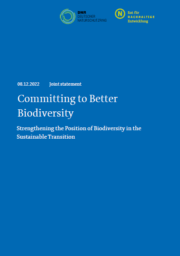 Strengthening the Position of Biodiversity in the Sustainable Transition - Joint statement by DNR and RNE; Berlin 08.12.2022