Sustainability policy in Germany is closely intertwined with European and international policy and is oriented towards the global Sustainable Development Goals (SDGs) formulated in 2015 by the United Nations as part of the 2030 Agenda. Their usage and implementation in Germany is intended to make a life in “peace, dignity and prosperity” possible for all people, as described by former UN Secretary General Ban Ki-moon at the time.

The German Council for Sustainable Development (RNE) was first established in 2001 by then Federal Chancellor Gerhard Schröder (SPD). Federal Chancellor Angela Merkel has since then extended the commissioning of the Council every three years, most recently in 2016. In 2002 the first German National Sustainable Development Strategy was published under the title “Perspectives for Germany”. The currently valid version was ratified by the federal cabinet in January 2017. Most of the German federal states (Länder) also have their own sustainability strategies.

In 2016 aligned Germany amended its sustainability strategy with the SDGs of the United Nations, thereby also highlighting the national dedication to making a contribution towards realising the global Sustainable Development Goals. The golden triangle of sustainability goals represents the intersection of environmental, economic and social concerns whereby the preservation of the natural foundation for life worldwide and a life with dignity for all are equally important as determining limits. This is the philosophy the strategy aims to implement. A few examples provide a more concrete picture: land consumption is to be limited to less than 30 hectares per day (it is currently double that). In the agricultural sector, the share of organically cultivated land is to be increased to 20 per cent. With regard to healthcare, the percentage of smokers is to be reduced considerably by 2030 as well as the amount of nitrogen oxide and particulate pollution in the atmosphere.

Other goals prescribe that renewable energy be expanded to make up 30 per cent of gross final energy consumption by 2030 – and at the same time, primary energy consumption should be decreased substantially. Targets have also been set for the national deficit. Sustainability in private consumption was taken up in a new goal in 2016: the market share for certified fair trade and organic products is to rise to 34 per cent by 2030. Every two years, the German Federal Statistical Office presents a report on how much progress has been made towards reaching the goals. A progress report is published by the Federal Government every four years. The RNE regularly presents its opinion on these developments and makes recommendations.

The Federal Government additionally commissions the RNE to carry out assessments of German sustainability policy by international experts at regular intervals. The current peer review (2018) is chaired by the former Prime Minister of New Zealand and former Administrator of the UN Development Programme Helen Clark.

One of the key tasks of the RNE is to provide the Federal Government with effective support in developing the German Sustainable Development Strategy further. What should happen if the goals are not reached? In this regard, the German Sustainable Development Strategy serves the basis for societal debate on appropriate measures.

Often, the role of the RNE is to voice a critical opinion: “However, the draft too often takes the path of the least resistance. Fundamental changes are required, yet it only presents moderate adjustments,” was the RNE’s opinion on the first draft of the revised German Sustainable Development Strategy in 2016, for instance. When the Federal Government subsequently ratified the strategy, RNE Chairwoman Marlehn Thieme commented that Berlin needed to “work more consistently and with greater coordination towards achieving the goals.”

To this end, the RNE has also advocated that sustainability be taken up as a national goal in the German constitution. Doing so would send a clear political signal to the international community – after all, a global transformation will only be possible if all nations consistently implement the UN Sustainable Development Goals within their borders and in collaboration with other countries.

Ideas and actions for implementing the 2030 Agenda in Germany

This is the second time the German Almanac of Sustainability has been published by the German Council for Sustainable Development (RNE). It shows via concrete projects and initiatives at municipal level, in the policy area and in the business sector where exactly the transformation towards a more ecologically and socially compatible society is in full swing. Designed to address the public at large, the Almanac fosters and cultivates societal dialogue both at home and abroad.

After its first publication in 2017 this second edition takes up new topic areas and projects and presents how much we – society – have already learned in the area of sustainability and what has today already been set in motion. However, it also examines what we can still learn – from countries all over the world.

Ideas and actions aimed at achieving a future-oriented, equitable and open society by the year 2030 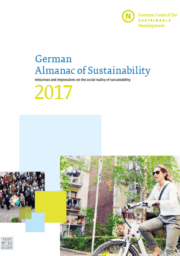