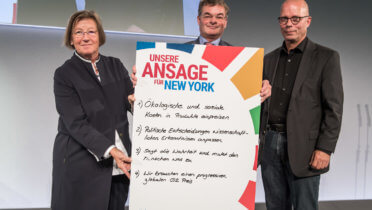 The challenge of climate change

The dangerous effects of climate change have the potential to shape the worldwide community more strongly than any other influence. The so-called 1.5- or 2-degree target is an important consensus. If this limit is exceeded, the probability is considered too high that climate change will become self-reinforcing and irreversible, among other things because permafrost will thaw and the salinity of the oceans will decrease. According to the World Biodiversity Council, between 50 and 700 million people could lose the basis for their livelihoods as a result of unchecked climate change. This would cause people to be expelled or flee from their homes and trigger military conflicts. Species of all kinds of plants and animals would be threatened with extinction – even more so than is the case today.

As of June 2020, 189 of 197 signatory parties (196 nations and the EU) had ratified the Paris Agreement. The USA – second-largest emitter of CO2 in the world after China – has decided to withdraw from the agreement and will officially cease to participate in it on 4 November 2020.

The agreement involves each state declaring what it intends to do to protect the climate. These nationally determined contributions (NDCs) comprise a broad range of highly specific measures. Nepal, for instance, intends to fight deforestation, while Chile has pledged to expand the use of solar and wind power. Whether or not the voluntary commitment approach of the Paris Agreement will take hold and eventually prove effective remains to be seen.

Initial impetus has been provided with the European Green Deal. However, additional systematic changes and incentives are needed – especially in the fields of energy, mobility and buildings – to achieve the targets which have been set. The EU has set itself the joint goal of reducing greenhouse gases by 40 per cent by the year 2030, with 1990 as its baseline; the European Commission and many states want to up the targets to between 50 and 55 per cent. Germany hoped to achieve the 40 per cent by as early as 2020 and had managed 35 per cent by 2019. Every five years, the signatories to the Paris Agreement have to submit ambitious new targets to the United Nations. This means they will have to do this for the first time by the end of 2020. It is essential that this happens because even if the NDCs are met – which is questionable – they will not achieve the two-degree target as they stand. The Paris Agreement also contains a commitment to help developing countries adapt to climate change. The industrialised nations have undertaken to provide public and private funding of 100 billion US dollars for this purpose each year from 2020 onward. Moreover, the financial markets are to be overhauled to align them with the climate goals. The German government’s Sustainable Finance Committee is working on ways in which this can be done. The German Council for Sustainable Development initiated the debate between 2017 and 2019 through the Hub for Sustainable Finance.

To meet the climate protection targets, it is essential that the energy sector, but also agriculture, industry, transport and the buildings sector, drive down their emissions significantly. Germany set out the scale of the necessary reductions with its Climate Protection Act in December 2019. This stipulates a decrease of at least 55 per cent in CO2 emissions by 2030; the target is broken down by sector. In transport, for example, emissions are to fall from 150 to 95 million tonnes of CO2 equivalents per year. Germany intends to be climate-neutral by 2050.

The major challenges include sufficient electricity use, expanding the grid, storing power, completing the phase-out of coal, bringing about a shift in mobility and agriculture, changing industrial production, and linking the heat, mobility and power supply sectors. As part of these efforts, the German government intends to establish hydrogen as a source of energy. The German Council for Sustainable Development (RNE) is calling for this to be implemented faster, more consistently and with greater international involvement than it has been to date. For the RNE, social aspects and fairness in distribution also play an important role in the transformation. The main philosophy behind the Council’s work is to view sustainability as part of a larger context – the energy transition is one component of a more general transformation. With this in mind, the RNE has great expectations of Germany’s presidency of the Council of the EU and calls on all European Member States to align the recovery from the crisis with the core principle of sustainability.

sustainable_AND_digital: Sustainable development as the framework for digital transformation

Recommendations of the German Council for Sustainable Development to the German Government, Berlin December 2018

This website uses cookies. Some of them are technically necessary for the operation of our content management system. In addition, we use the tracking program "Matomo" for statistical analysis of website usage and to optimize our Homepage. Matomo stores the information anonymized, in accordance with data protection law and temporarily only on our server. Further information can be found in the Privacy Policy.Accept all cookies (including Matomo)Accept only technically necessary cookies